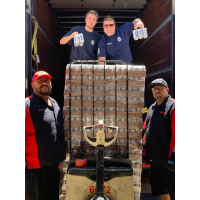 June 3, 2019 – Hensley Beverage Company, in conjunction with Anheuser-Busch and their Emergency Drinking Water Program, has coordinated and delivered 22 pallets of canned water to aid firefighters of Mammoth & Hayden, Arizona and specifically Pinal Rural Fire and Medical District and Hayden Fire Departments.  This equates to over 2,200 cases or 52,000 12 oz. cans of clean drinking water.
Anheuser-Busch (A-B) periodically stops beer production to can emergency drinking water for use across the country and this year has teamed up with the National Volunteer Fire Council (NVFC). According to Andrew McCain, Hensley’s President & COO, “As Arizona faces more natural disasters, like seasonal wildfires, Hensley & A-B feel a responsibility to be proactive and put procedures and products in place that will be readily available prior to emergency occurrence.  This water program places necessary resources in areas that may need it the most, and in a timely fashion.”
The water will be used by firefighters to stave off dehydration when fighting fires. According to Heather Schafer, CEO of the NVFC. “Many Americans don’t realize that 65 percent of our nation’s firefighters are actually volunteers, with nearly 85 percent of fire departments being all or mostly volunteer.” To address the need to assist firefighters and emergency personnel, Anheuser-Busch and their wholesalers (since 1988, and including Hensley Beverage), have provided more that 80 million cans of water to U.S. communities affected by natural disasters worldwide.
About Hensley Beverage Company: Founded in 1955 and Arizona’s largest beer distributor, Hensley is a multi-generational, family-owned, local Arizona beverage wholesaler that distributes a diverse and first-rate portfolio of beverages, including Anheuser-Busch InBev beers, top selling local and regional craft beers, premium non-alcohol beverages, water, soda, tea, and spirits.
Hensley maintains a proprietary service fleet of more than 800 vehicles and has the support of over 1,100 employees, servicing a customer base of more than 9,000 retail accounts throughout Arizona from multiple state-wide branches. With corporate headquarters located in Phoenix, Hensley also has fully operational controlled environment warehouse space in five different locations across Arizona including Tucson, Flagstaff, Prescott Valley, Chandler and Show Low.

About The National Volunteer Fire Council:  The National Volunteer Fire Council (NVFC) is the leading nonprofit membership association representing the interests of the volunteer fire, emergency medical, and rescue services. The NVFC serves as the voice of the volunteer in the national arena and provides invaluable advocacy, resources, programs, and education for first responders across the nation. Learn more at www.nvfc.org.